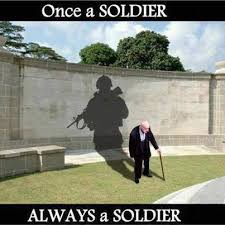 Lest we forget. Everyone bears a cross. For Joe, his cross was schizophrenia. Joe lives on the south side of Welland. The day I met Joe, he led me through a pathway in his house which had been carved through his cavernous piles of stuff. There was a small spot in the living room just big enough for a kitchen chair. It was there I sat as he was swallowed up in his second hand Lazy-Boy.

He told me a sad tale. He used to belong to a faith community. He was a member of All People’s Memorial Church which, as you know, has since closed down. It wasn’t like he had a lot to give them but throughout the spring, summer and fall, he would drag his lawnmower down the sidewalk to the church and cut their grass. This simple act represented his loyalty to this faith community, his grace towards it, his dedication to it, and his love for it.

Because his illness makes him socially anxious, he would sit by himself on one side of the church. Sometimes, not often, but sometimes when he was feeling really good, he might stay for a coffee. When the church closed, Joe lost his community. “I rarely go out of the house anymore and I know that is not good for me,” he says. So he reached out to other churches in his area United, Catholic, Anglican…but none- not one- reached out to him. “I have nothing against Wesley Church,” he said to me, “but it’s too far away. I want to be somewhere in my community.”

Why have the churches not reached out to him? Sure, his hair hasn’t seen a brush in some time and his shirt still reports what he ate for lunch, and his over-sized pants are cinched too tight. And we church people understand our religious commitment to provide for people like Joe but we don’t want him sitting next to us in our pew, spilling communion wine with his shaky hand all over our new flooring. (when we finish it.)

We have worked hard all our lives NOT to be like Joe. We have worked diligently so we could afford to come to church in our long Sunday-go a meeting best robes, sit in places of honour in our favourite pews, and sing the Lord’s prayer by rote in a tune we have come to embrace.

Jesus sees a widow place two small coins in the temple treasury and says to those who follow him that this woman has contributed more to this temple than all those who have given out of their abundance. Our hearts understand what Jesus is saying to us. Those who are giving out of their abundance-well, it’s not really costing them anything, is it? But to this woman’s two small coins may mean sacrificing her next meal. These two small coins represent the loyalty she has towards her faith, her grace in thinking of others, her dedication and ultimately her love for God’s house. And this place has not ignored her. They are bound by religious law to make sure she doesn’t starve and that she is not left out on the streets.

Yet, as great as her sacrifice is, she feels compelled to enter the temple through the side door. They don’t want her to get comfortable in the temple. That’s why churches built Narthexes so people like her could stand out there during the services observing others as they file past in their long robes and finery processing up to the best seats in the house, uniting their voices in the prayers they recite by rote. They have spent their lives trying not to be like her. They don’t want to be powerless and insignificant. They want to enter through the grand front doors where it will be evident to those gathered that they are nothing like her.

He stands outside the door at Tim Horton’s, his collar turned up against the weather, his box of poppies strung around his neck. At his age, his memory has begun to fade with the medal ribbons that he wears.

After his leg wound will allow him to stand no more, he’ll head inside and carefully nurse precious coins from his wallet to pay for his small coffee. The doughnuts taunt him as they do to all of us, but they are only for special occasions, like Christmas. He’ll sit on his own in the corner booth looking out at a bustling world through the steam of his small coffee. A world that no longer sees him, a world that no longer cares. The coffee shakes as he raises it to his lips. Being a gunner in the war will do that to you.

Her has never been able to work since the war. Spending three years in a Japanese prisoner of war camp will do that to you. Now they have a name for it, PTSD. Back then if you didn’t have an obvious wound, a leg missing or a physical scar, they just ushered you out the door and wished your broken mind and heart the best of luck. Now, the country he served ignores him. Living in the freedom of his sacrifice for them, his loyalty provided for them, his dedication bought for them, his grace gave to them, his love offered to them, people are far too busy trying to not end up like him.

The people rushing by this window are busy acquiring the robes of the latest fashion, pursuing the important parking spaces with their names on them and espousing long and lengthy liturgies about future capitals, bit-coins and profit and loss margins. Oh, for sure, their tax dollars and charitable donations ensure he will have a modest roof over his head, food on the shelves of the food bank and a soup line he can always attend. But, for one who gave his all, their pocket change seems a little meager.

In that same Tim Horton’s sits a student from a nearby high school. She sees the old man warming his hands around the coffee cup. She sees the medals on his chest. She opens her binder and scribbles out his poem.

I don’t know you.

I wish that I did.

I wish I knew your name.

I wish I could shake you hand.

There must be days

when you wonder why you served.

Question if you made a difference in the world.

you have made a difference to me.

I lie down at night and feel safe.

I wake up and forget all the danger in the world.

I know that is because of you.

I don’t know what it cost you.

But I owe you more than just my thanks.

What you’ve missed in life;

I don’t take that for granted.

I am just one person

but I know I speak for many.

I hope you know that I am grateful.

Tonight before I go to bed

I am going to pray for you.

for you to feel peace.

I don’t know you

But I wish I did.

With that, she closes her binder, heads to the counter, buys herself a small coffee and two doughnuts. She heads for his table.