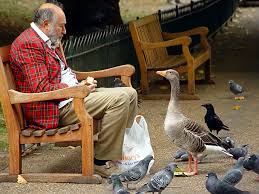 It’s a story which bears repeating. He was fresh out of seminary, still wet behind the ears. He arrived at his first church service bright as his new robe with enthusiasm, clerical collar all bleached and polished. His first sermon although a tad academic, was, by and large, well accepted by the congregation.

However, the next Sunday, he proceeds to preach the same sermon. It lifted a few eyebrows but these were a kind people, and, after all, he was new to all of this. Little was said. But after the third Sunday of hearing the same sermon, the rumblings began. Shaking hands following the service, an elder approached. “I don’t know if they told you this in seminary, but we are expecting a new sermon every week.” His response, “Oh, I’ll be glad to write a new sermon as soon as you do something about this first one.”

I feel a little like that this morning. Wasn’t this the same scripture we read two weeks ago? In fact it is the same story but it comes from a different story teller. Last time, it was John telling us this story within the context of his belief that resurrection is about relationship. This week we have Luke telling the story. Luke’s account of Jesus’ appearance to the disciples is practically the same as John’s except for the last line. Luke inserts, “You are witnesses of these things.” And here is why you should care about any of this.

Shortly after arriving at a new congregation, the chair of council pulled me aside at coffee hour and pointed out to me a rather demure, older gentleman sitting alone, savouring his tea and cookie. One could see through the lines on his face that a rugged handsomeness still existed. His expression at that moment was one of sheer appreciation as if the tea he was tasting was the rarest and most sensuous of wines. “That’s Bill,” the chair said. “He’s been coming here forever. He lives all alone and we sort of look out for him. Be good if you dropped in on him from time to time.”

Shortly thereafter, I found myself driving down the main street of the town after a morning of … well, to be honest I don’t really remember. But knowing the church, it was probably a meeting of some kind or another. We love our meetings. Bill lived in a small two room, not two bedroom, but two room apartment above a store front. Bill had seen this store become the home of many retail dreams throughout the years he lived there. There was no response at the door. Heading back to my car, I spied Bill occupying a bench in the small park across the street. Without surprise or ceremony, he moved over to offer me a space beside him. “I wondered how long it would be before they sent you to check in on me,” he said with mirth and kindness in his voice. I thought for a moment I was in the presence of St. Francis. My entrance had scattering a suspicious crowd of creatures but slowly, in the desire for food and the trust they had developed with Bill, the squirrel returned to the armrest at his side and the pigeons landed on his knee.

Bill would feed them right from his hand and toss the extra seed at his feet. As he offered the squirrel a peanut to the shell, we sat in a harmonious silence. Bag empty Bill asked, “Tea?” and was shuffling back to his apartment before I could respond. The stairs were a struggle but there was no utterance of complaint. The apartment was well lived in. Clean, cared for-but not obsessively. Books lined his walls and some were laid butterflied out on the arms of chairs and any spare table they could find. It spoke of a man who may not have been as simple as most thought him to be. Quietness does not always equate to simplicity. The appropriate time had come for speaking.

With a few probing questions, Bill gently, but without reserve, opened up about his life. He had spent most of it on a loading dock at the local steel company. He had been offered promotions but he had turned them down. Most thought Bill a simpleton with no ambition, maybe even lazy, but he offered me this context. “Life in an corporation is like a spider’s web. The closer you get to the center of that web, the greater the chance of being bitten with the venom of politics, power and ambition.” Bill didn’t like politics. “It’s a place where truth is warped by the desire for power,” he said. Not much to argue about there. “Staying out on the fringes kept me from that spider’s bite. I was treated well by the company. Honest day’s pay for an honest day’s work. I have no complaints.”

However, that was not his ex-wife’s opinion. “Oh yes, I’d been married once. Have two daughters. My wife wanted more than the simple routine my life. She found greener fields when she married our dentist,” he said without bitterness. “He’s a good man and has always been good to the girls.” Here’s where I heard the pain of sacrifice. Bill never wanted to deprive his children of a home and he knew they had a much better one where they were. So he never fought to see his kids during holidays. He wanted them to develop traditions and have a place they could call home. Besides, he could never offer them a cottage up north nor the ski trips to Aspen with their half-brothers. He paused as he was about to hand me my tea, allowing the notes from a Mozart aria to pass between us. “I know there will always be love between us,” he said, coming back to the conversation of his daughters. The reality is I will never be more than just a guest in their lives. But they are happy, healthy and stable. That’s all that really matters.”

Switching subjects without a breath he then said, “I used to own a car, you know. Needed it for work. That was a great old girl. Never gave me a scrap of trouble. Got rid of it when I retired. I think that pleased Mother Nature. I can take the bus now down to the Crisis Centre. I do what I can down there. People give me rides to the church.”

I left Bill’s place finding myself on the same bench in the park. The animals never came. I had come to see one man and came out knowing another. Why are we so ready to assume that someone who lives simply, who is quietly reserved, is somehow lacking in some way? It never occurs to us that this way of being may have been a very conscious, faithful and wise choice. Bill was not defined by his possessions. He had not allowed the prizes of corporations to lure him into compromising the truths he held dear. This was a man who found balance, harmony and contentment in his life. A man who cherished every small pleasure and expressed gratitude for it. A man whose loving bore the scars of sacrifice.

Reluctantly, I needed to leave this place. I had a council meeting to get to. I didn’t want to late, not for fear of my new friends thinking me tardy but because I had something to tell them. Instead of looking out for Bill, maybe they needed to start looking at him.

Luke tells us, “You are witness to these things.” Not, you will be witness. Not, please be a witness. Not, consider becoming a witness, if you have the time. No, YOU ARE WITNESS. Your lives, your actions, your responses to what life throws at you, give witness to what you hold as truth in your heart and soul. It’s not optional nor an intermittent activity of faith that you decided to do one day and then take the next day off. It is constant. It is a way of life. It is who you are.

You may think that others don’t really see you, and maybe, there are those who don’t. That is sad, sad for them that they walk the earth in such a void. Maybe you think that God doesn’t need you to be a witness or that it really doesn’t matter to this world. All the while, negating God’s attempts to use us to expand the horizons of God’s kingdom and God’s relentless attempts to expand our own imaginations. The reality is your lives witness to something and you can not defuse that.

Today, Jesus stands in front of us showing us his hands, his feet and side. He says, “It is I, who have been resurrected in love.” The shadows of death have been dissolved. Chains that once shackled have fallen away. Prison cells have been opened. Forgiveness, grace, and new life have been proclaimed. You and I, each one of us, by virtue of the fact that we are sitting here this morning, are witness to this. What do our lives proclaim?