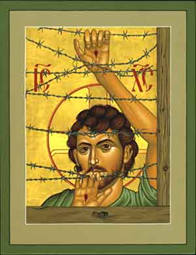 THE MAN WHO WOULD BE KING

There once was a poor man who lived in the kingdom of a Great King. This King had not risen from among the people who lived there. He was what they called a conquering king. He came upon them with a mighty army. This nation, poor as it was, was always ready to share what little they had. They had no need of an army. So the Great King simply came in and took what he wanted; crops from the fields to feed his soldiers, taxes levied to pay for his opulence. Proudly he called his conquest.
He hung banners from the walls of the city and placed statues of himself around the nation so people would remember to whom they belonged, to whom they paid homage, who was their Great King. He used the people as slaves to build grand palaces. He even built the people a grand temple, larger and more ornate than anyone had ever seen before. He hung his banners upon this, too, telegraphing to the world that only a great king could build such a structure. He was by far the greatest. He ruled with a hard and mighty hand out of his own fear that one day someone might come along who was greater than he. So paranoid were his fears that he once ordered that all male children in the kingdom under the age of two be slaughtered. His kingship knew no mercy.
*****
For years the poor man worked under this oppressive tyrant. He had no choice. His father had died and he had his mother and 5 siblings to think about. So, every day he would take up his father’s work apron and a small satchel of food and join the throngs who would walk 5 miles to the seashore to build a grand summer home for the great King. It was considered an honour. He thought otherwise.
*****
The day came when all the siblings had grown, had families of their own, and were able to care for their mother. On that day, he left in the morning as he always did, but this time he left his nail apron upon its hook and his satchel on the table. He left to spread living water upon a parched earth. In the beginning, his words often fell on hard ground. He hoped that somehow they would seep into the cervices of people’s lives and soften the ground beneath. There he would plant the seeds of hope, faith and charity praying they would grow, The greatest of these seeds being love.
He touched those whom the world had abandoned. He sat at the tables of those the Great King had proclaimed as retributes. He invited a prostitute to follow him. His deep compassion healed the wounds of many. God’s soothing balm began to heal a nation.
*****
The Great King began to become fearful, the power you gain from intimidation only works when the people of the nation remain broken like horses. You lose all control if they are set free. For years the Great King watched and followed this poor man. Yet, the King’s fear would not let him wait forever. You know the story. Under the cloak of darkness when others could not see, he arrested the man. He tried to beat him into submission, paid off a crowd to call for his execution, then made a grand gesture of washing his hands before them, so the masses that were following this poor man would not seek vengeance from him.
They hung this poor man upon a cross, a death meant to be as humiliating as possible. As if the humiliation of being naked upon that cross and the pain of the nails were not enough, they added ridicule to their arsenal. “He saved others, let him save himself.”
There was really only one who spoke the truth on that day. He himself was a criminal who hung bedside him. Through parched lips he whispered, “Lord, it is not right you are here. I indeed, am receiving my just punishment for I am a thief. But you, my Lord, have done nothing wrong. It is their own fears that they have hung you here. Lord, I have no right to ask this, but I beg of you to remember me when you enter your kingdom.” In the face of such truth, the poor man, in spite of suffering his own pain, saw a wounded soul in need of compassion. From the desert of his mouth the poor man proclaims “Today, you shall be with me in paradise.” Then, with a greater compassion still, he looked to the ones fettered by fear, and said, “Lord, forgive them. They know not what they do.”
Today you are being asked who was truly poor and who was a king.