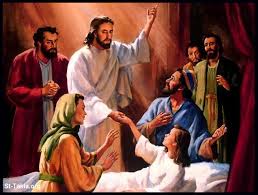 She Got Up and Served Them

“You’ve got to be kidding me. Are you serious?” I was sitting at M.T. Bellies having lunch at what the staff now refers to as my office. It’s not really as bad as it sounds. I like it there because my little back booth is quiet. I do love it when our church is so active. But the other side of that is every weightwatcher, senior bingo player, and karate kid thinks they need to pause and say, “Hi”. This, in and of itself, is a very good thing, being in relation with our community. However, it’s not conducive when you need to focus.

You can get really good Wi-Fi at M.T.’s. That means I can call up all my sermon resources, and you are going to see shortly why this really is important. So there I sit, listening to some pastors discussing our scripture for this Sunday on a blog. It went something like this: “Jesus and boys had left worship and Simon and Andrew had invited Jesus over for lunch. When they get there, they find out that Simon’s mother-in-law is sick in bed with a fever. Panic sets in because neither Simon nor Andrew can even boil water (I mean, they are men after all). Simon gets an idea and invites Jesus to meet his sick mother-in-law. Of course Jesus, being the compassionate soul he is, heals her and immediately she rises and makes them supper.”

By now my waitress is at my side asking me if everything is okay because, I guess, I said a little too loudly, “Are you guys kidding me? The ancient wisdom to be derived from this scripture, a wisdom that has passed through 2,000 years, is to tell us that Jesus healed this woman so that she could get up and make him supper? You bloody… (well, let’s just leave it at that, shall we?)

Unfortunately, I know all too well how passages like this one become operative in our world. There are those who still believe that the pulpit is ‘biblically designed for spiritual men.’ That is what happens to passages like this one, they get spun. The gospel truth of healing and welcoming into community is left unburied beneath cultural values that intentionally divide and control. They are intent on putting women in their place. For this is their role, is it not? Pouring coffee, making sandwiches, coordinating pot-lucks.

Let me demonstrate quickly for you the dangers of laying down the blanket of cultural norms so it covers gospel truth. In the 1800’s, the beaver became almost extinct in Canada because people back in Europe fancied wearing coats and hats made from their pelts. In pursuit of this lucrative market, the British simply came into Hudson’s Bay and took over vast parcels of land. They never asked permission from the people already there, simply stuck a flag in the ground and claimed it for Britain. Wars were fought with the French and Scots over trading routes. Entire indigenous villages were simply wiped out if they stood in their way. This was done by Christian nations who believed they were ordained by God and supported by scripture to be the chosen of God, to have dominion over all the earth.

The colonialism of Britain reached out to the far reaches of the earth, resourcing the whims of the privileged. Gold and diamonds from Africa, salts and tea from India, emeralds from China, virgin white pine from Algonquin Park to build masts for their navy. Taken, because of their divine rights over the primitive cultures of the rest of the world.

When labour was in short supply, the slave trade was born to support British interests. Hunted, shackled and packed together in cargo ships, treated like a commodity because they certainly weren’t considered human. People ripped from their land, their culture, Kings and Queens alike, so cotton and rice could be supplied in abundance to the world, all done by good, respectable, Christian businessmen.

Let us not forget that Hitler was a Christian and was supported by the clergy of his day which cost the lives of six million Jews.

Larry Nassar, who I am sure you all have heard about by now, was known as the doctor you sent your aspiring gymnast children to, if you wanted them to win. He is now sentenced to over 200 years in jail as more than 160 young women have come forward to testify to the sexual abuse he instigated. A white male, with huge privilege, who believed he had the right to do this, and apparently no one at Michigan State over 30 years knew anything about this.

I don’t need to recite to you the news of the last few months where Oprah Winfrey feels the need to stand up at her acceptance speech at the Golden Globes and say “No More”, “Your time is over.” A time of white male privilege that has been supported throughout the ages by the cultural norms that have been laid over our Christian scripture. Hopefully, we see by what I have just illustrated that what is happening today is not simply a feminist issue. It’s a human issue. When one group of people become continually confined to a ‘less-than’ status, when one group of people is not valued as made in the image of God, when one group of people are systemically oppressed, then we are all oppressed. This is the truth of the Gospel. We do not live in isolation. We live in a global village and when one part of this village is segregated and oppressed, then their pain has a rippling effect throughout our world.

Mark’s Gospel is an invitation for us to look for and experience the power of resurrection from these inequalities. This woman’s debilitating fever was equivalent to death, if it keeps her from doing what is human to do, to serve, to feed, to provide for others.

The verb ‘to serve’ is a key term in Mark’s gospel. On the most literal level , this verb means that she gets up and prepares and serves food. But the Greek verb ‘diakonein’ is also used when the angels come and minister to Jesus in the wilderness. The use of the same verb informs us that Simon’s mother-in-law’s service is the embodiment of what the angels did for Jesus. This, by the way, is also how Jesus describes his own ministry, as one who serves. He owns for himself Isaiah’s name for the Messiah. He calls himself the ‘suffering servant.’

Simon’s mother-in-law does not serve because she has to, or because this is her place in the world. She serves because that is what discipleship looks like. Jesus takes her by the hand. He raises her up. There’s that element of healing love here, not just for her body but for the restoration of her soul. Simon’s mother-in-law becomes the first icon of resurrection in Mark’s gospel.

And understand, that in Mark’s gospel, there is no individual healing. Only the kind of healing which repairs relationship; father to son, daughter to mother, mother to children and even a mother-in-law to her son-in-law (now there’s a miracle). Even the ostracized, bleeding woman who reaches out from the crowd to touch the hem of Jesus’ robe is restored to community when Jesus calls her daughter. Release from that which isolates, healing of the wounds which subjugate the soul, restored to a place at the table, so that each one of us can assume our place calling as servants to all members of God’s family. That’s Mark’s Gospel message, rising from being buried beneath the layers of dust accumulated through centuries of cultural norm.

Resurrection. Mark alludes to it over and over again in gospel. The kind of resurrection that one can see whenever any group feels lifted by the hand of God to stand and say “No More” and is empowered to go into the world serving others, restoring others, feeding them with hope, dignity and respect, so that no soul shall ever have to go hungry again either literally or spiritually, because people like Simon’s mother-in-law get up and feed them.