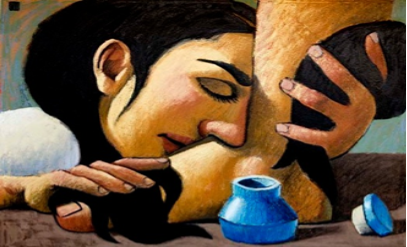 This is a love story. Now, before all you gentlemen out there start rolling your eyes, thinking that you are going to have sit through another chick flick…know that you are not alone.

Judas was a love resister. His faith, and Judas did have a faith, but he couldn’t see it reflected in this intimate act of Mary’s hair wiping Jesus’ feet. His traditional Jewish upbringing would have made him feel really uncomfortable with this kind of public display of affection. Many of the faithful since would agree with him. People who exercise their faith with their minds, studying the word, writing texts on Christology, debating concepts like salvation, eschatology, the virgin birth. They would have debated with Judas whether what Mary did was appropriate.

Or those who express their faith through social justice, faith in action, mission work, reaching out. They would have also agreed with Judas. “What a waste of money. Think of all the people who could have been fed with that kind of money.” Be not mistaken. I am not suggesting that these ways of expressing one’s faith are somehow lesser than others. What I am suggesting is that God’s first command is to…“Love the Lord Your God with all your heart, your mind and your soul.” That God wants us to exercise a holistic faith. That all parts of our being are to be incorporated into our love for God.

Some people keep their faith in their minds, because this is their particular strength. They’re academics, it is their safe place. Others in their soul, when they empathetically reach out to share in the pain and hurt of the world. But then there is also the heart and God wants that too.
*****
This is Mary’s story. She had the strength of faith to stand up in the midst of a room full of men, break open a vial of costly ointment, and inhale Love’s fragrance. “What nonsense,” say the debaters. “What waste,” say the social activists. “What a beautiful recognition of me,” says Jesus. So, as uncomfortable as this chick story may make you, don’t dismiss it because Jesus sure didn’t.
*****
Somewhere in the playfulness of my mind, when Jesus was being loved by Mary with a grace upon grace kind of love, a love you can smell the fragrance of for days to come, I wonder if Jesus remembered his mother.

Three years ago, back in Cana, Jesus had insisted at that wedding that his time had not yet come. But his mother, as most mothers do, knew better. In her heart she knew him, what he was capable of doing, and probably had more faith in him than he had in himself. So, she told the steward at the wedding to do whatever Jesus told him to do. Seemed a little silly to be filling jars with water when what the guests wanted was more wine for the reception. But Mary insisted and it was because of her insistence and her encouragement towards her son that Jesus starts doing what Jesus came to do, what he was sent to do. Mary, his mother, loves Jesus into the future, as the Word made flesh.
*****
Here is true love. It is not a love that protects,but a love that believes in the potential and destiny of the other. It’s hard though, isn’t it? We know that there is a big bad world out there, one that will take advantage of the innocent ones, the naive ones, the good ones. So, we want to wrap our children in that protective bubble wrap of love.

Yet, we also know that no life is ever an accident, and that all life was created by God with intention, purpose and meaning. True love means loving our children into their futures, an insistence of their being who they were created to be, of living into their destiny, and giving them the encouragement to have the courage to express their gifts in the world.

This doesn’t mean life will be perfect. For Mary, it meant watching her son die upon a cross. But what it does mean is that the world will be a better place because someone was loved forward into it, and the world received that love. Jesus took all love he saw in his mother’s eyes as he hung upon the cross and took it to the tomb with him. A love that would love him into his future as the resurrection and the life.
*****

But for today, Jesus finds himself in Bethany, just about 5 miles south of Jerusalem, and 6 days away from entering it. He is at the home of his good friends. Mary, Martha and Lazarus. He has sat at this table before. This was the home where Mary sat at his knee while Martha ran around and preparing dinner for the whole gang. Martha was not impressed. And, of course, Lazarus, who was now sitting with them, was the one Jesus had resurrected. Once again, they have gathered around this friendship table. This time, however, is different. Jesus knows this will be the last time. He knows that what awaits him in Jerusalem and it is not good. Yet, if his ministry of liberation is to have any meaning, then he must meet head on the powers that oppose it.

Jesus is anxious and preoccupied, knowing what he must do, not thrilled with the torture the privileged will inflict nor the pain he will suffer. At this moment, when all the rest of them are singing the battle songs of triumph, Mary is the only one who sees with her heart. At this moment, she gives Jesus what he needs. She loves him into his future. Going to her room, she takes from its hiding place a jar of costly ointment, one she had saved for a whole year to buy, opens it and pours some of it upon Jesus’ head. A royal anointment. A reminder to Jesus that he is a King, insists that he remember what his mother told him about his birth. How the heavens had proclaimed him King of Kings, Lord of Lords, Prince of Peace.

In the lengthening shadows of that room, Jesus needed that reminder. Then, as she cups his feet in her hands, she anoints his feet, an act of burial. Then she does what only a heart can do. She bends down, places her face right into the sour odour of humanity and wipes the filth away with her own hair. She is telling him she understands. She is telling him that her love with follow him to the grave. She encourages him to believe that he will never be alone.
******
In the days to come, Jesus would kneel before his own disciples, would cup each of their feet in his own hands, yes, even the feet of those who would deny him and betray him, and wash them just as Mary had. The love of Mary, which moved Jesus forward, would give him the strength to hand himself over to the soldiers in the garden without a fight, would give him the strength to carry his own cross, would see him through the dying and rising. Mary’s loves Jesus into his future as the fulfillment of, “for God so loved the world.”
*****
Isn’t this pretty much how love works? Which of us could have been able to do what we had to do, needed to do, without someone, somewhere saying, “ You can do this. I know you. I know what you are capable of. I have seen your gifts. You need to trust them.”

Jesus is loved into the future by two remarkable women, his mother and his friend. With the odours of cynicism and despair coming from the voices of the loveless, from people like Judas, we ask today “who may we love into their futures, and thus into the world, as we spread love’s fragrance upon them?