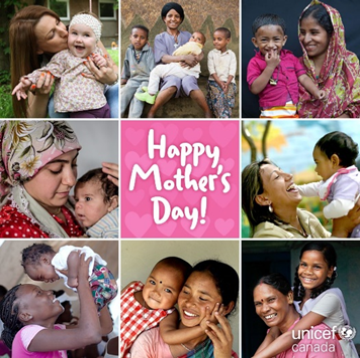 This is a gentle sermon in honour of Mother’s Day. I would like to re-introduce you to Harrison Adams Murray, our second grandchild. My wife Nancy’s son Scott lives in Sarnia with his wife Katelyn with their two boys, Bennett and Harrison. Harrison is now 3 ½ months old weighing in at a little over 18 pounds and he is what his mothers affectionately refers to as ‘my little chunker’. He’s a big boy who is growing into a big name. He is also the most content, easy going child you could ever have cause to meet.
Harrison was baptized in Ancaster yesterday, Ancaster being the hub of the spider’s web for family travels. This little guy amazed me as he allowed himself to be passed from one strange relative to another, content with making bubbles with his spit, grinning and cooing, spitting up a projectile or two upon the unsuspecting, UNTIL…. UNTIL, he was not. Experienced grandmothers rushed in, but even all that collected experience could not quell the tide of discontent. There are times when a guy just needs his mom. In his mother’s arms he is known and there is knowing of his mom. He knows that face, that smile, the tone of that voice. He knows the hands and arms, the fragrance of that body, the warmth of that skin. No matter where they are, this is a place Harrison can trust, feel secure knowing that mom understands his unspoken need for food, cleaning, for sleep. In this moment there is no one else, no other world than that connection of knowing his mom and being known by her.
*****
Jesus said, “My sheep hear my voice, and I know them, and they follow me. ” Jesus is referring to this kind of knowing. It’s the kind of knowing one has when you can pick out your kid, covered in gear, at a hockey of football game. It’s the kind of knowing you possess when you get a text from your child in university and you can read the between the generic lines and know you need to call him. It’s the kind of knowing that exists when the child you love says your name in a way no one else quite can. It’s the kind of knowing that you will never let go of, not even in death.
*****
I was driving back to the Church last Friday from the reception which was held by Anna and Les’ family when I heard a remarkable conversation on CBC coming from a child psychologist who said she believes that this generation of new parents suffer more anxiety over parenthood than any previous generation. This amazed her because, as she also stated, this is the most educated generation of parents there has ever been. She mused that one would think that with all those books out there and all this information available to them with a touch on their cell phones, these would be the most confident parents. But they’re not, because all this information has done is increase their fear of being a failure as a parent. Of not doing it right. They are words, simple words which may contain information but can never replace knowing your child.
In fact, all this information may well interfere with trusting such knowing as parents continue to question themselves, apprehensive that they’re going to mess their child up, thereby, never trusting their own knowing of this child. Personally, I like what one father had to say to his newborn son. He writes, “To my son: I want to apologize for everything I’m going to do over the next eighteen or so years. For everything I will miss. Everything I don’t understand. All the notes about parent-teacher conferences you won’t want to show me. For doing my ‘mom-was-wrong-and dad-was-right’ dance around other people. For buying a minivan. For wearing shorts. For the holidays. The cowboy hat. For the REAL MEN WEIGH OVER 200 POUNDS t-shirt. The speech at your high school graduation party…Once you’re older you’ll realize that I made an endless line of mistakes during your childhood. I know that. I’ve resigned myself to it. I just want you to know that I did my very, very best. I left it all on the field. I gave this every ounce of everything I had…and I googled like hell…And I always loved you.
*****
That is allowing yourself to be known and knowing another.
*****
Jesus was strolling through the east portico of the temple. He had been in Jerusalem for awhile now, teaching the people. There are people there who want to know. They want to know in their black and white law-bound idea of religion whether Jesus is the Messiah. “Come on Jesus, just tell us. Are you the Son of God or not?” Jesus knows that this kind of knowing means little when it comes to having a relationship with God. He knew that these Pharisees, so caught in their learning, in having all the information, in having all the facts so they don’t fail, does nothing to increase their knowing of God. Jesus gives it to them straight. “I have been here all week yet you don’t accept my words. I have even shown you signs of healing that come from above and you still question. What makes you think that my simply telling you is going to change your minds?” All he can say truthfully say is,

“My sheep hear my voice,
and I know them,
and they follow me.”
*****
There were many times over the past 4 years she would see my truck in the parking lot and drop in to see me, tears usually overwhelming her. This child of hers, the infant she once nursed in her arms, had become a teenage rebel without a cause. “Do you know what it feels like to have your kid brought home at 3:00 in the morning by the police? Do you know how it feels to be told your kid is rotten as he hands you yet another expulsion slip? What it feels like to have your child shut himself up in his room not wanting to talk to you, as he listens to some dark music about killing and drugs and…..What it feels like to have to hide your wallet all the time and even take the car battery out so he doesn’t go for a joy ride?”
“But that’s not my son.” she kept saying. “I don’t know who it is right now, but it is not my son. I know my son is good kid. Somewhere deep down inside there is a good kid in there.” So we talk, and words spill out the painful emotions that need purging. There are no answers. “All you can do is keep believing in him, keep loving him. Maybe one day he will begin to believe in himself.”
By the grace of God, that day came when her child actually graduated high school. He got accepted into college to become a heavy equipment diesel mechanic. The night before he was to leave, he approached his parents sitting in the living room and, in a halting voice, said to them, “Mom and Dad, I’m sorry for having been such a jerk. Thank you for sticking with me and never giving up on me. I don’t know why you guys stuck with me through it all. Thank you for always loving me, always believing that I was better than I was.” THERE, there is the true meaning of being known and knowing another.

“My sheep hear my voice,
and I know them.
Even when they rebel against me. Even when hey forsake me for other gods. I’ll never forsake them, for I know them. I created them and I know their hearts. Which is why, as their shepherd, their parent, I am prepared to lay down my life for them to travel through the cross and the grave for them, because I know they are worth redemption that there is a goodness within them that is worth resurrecting even if they don’t believe it of themselves.”
*****
By the way, this young man did graduate from college, got a job up north for a mining factory, loves the north, has recently gotten married and now has a beautiful baby girl. I’ve never seen her but grandchildren are reported to be beautiful by their grandmothers.

In the knowing of another, there is always redemption.