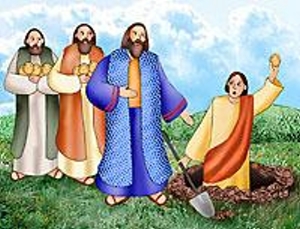 His name was Gabriel, a name his father had always hated. His father considered himself a man’s man, a hard drinking, cigar smokin’ selfacclaimed red-neck truck driver who blamed his stupid boss and the crooks on capital hill for his life. Believing that his son, a sensitive, creative, book-loving boy, was the result of having been switched at birth  by the idiots at the hospital, all the neighbours within ear shot knew that he blamed his wife for the boy. “Couldn’t have given him a real man’s name, like Sam, or Joe, or Chuck, could you? Had to give him some wimp’s name, like Gabriel.”  More interested in concert band than football, he was a complete embarrassment to his father, who reminded him of this in a steady stream of taunts.

One morning, Gabriel was simply standing in the backyard  embracing a sunrise. A blow to his back suddenly face-planted him. Gabriel hadn’t noticed his father and buddies half asleep on the porch after pulling an all-nighter on the bottle. His father had nailed him with a football. Riotous laughter rang in Gabriel’s ears. “Stunned much. You’re supposed to catch those, idiot.”

One time, when Gabriel was supposed to be piling wood, his father caught him lying in the wheelbarrow reading. In an anger that was always close to the surface, he tore the book from Gabriel’s hands, ripped out some pages and threw the whole thing in the stove.   Gabriel’s survival strategy was simple. He made himself invisible. He knew no one would ever notice he was gone. You can’t torment a ghost.

All through high school he sat invisibly in the back row, doing just enough to pass his classes but never enough to be recognized. In his final year of high school, he was called to the guidance counselor’s office. After having to look up his name, and reviewing his average grades, the counselor suggested that Gabriel go to community college and get a trade. Never one to argue with any one assessment of him, that’s exactly what he did. He became an electrician. He got a job at the local factory, which he didn’t hate. It suited him. Punch in, punch out. There was a right way to do things and a wrong way.  Black and white. He liked that, following the daily maintenance schedule. He said hello to those he passed, read his newspaper in the lunch room and went home.

He never took a risk. Never divulged himself by stating opinions or making a stand on anything.  He became a lion trainer to his mind always controlling the roar of his considerable intelligence believing that no one really cared what he thought anyway. Why would they? He was  nothing.  *****

Such was Gabriel’s life. I would venture a guess here this morning and say that there is a little of Gabriel in all of us. A piece of Gabriel even in those who venture to take on leadership roles, who always second guess themselves, and indeed, at times, wonder if they are really imposters. A piece of Gabriel in the soul of Leonard Cohen who, from the darkness of his depression, creates the most haunting music but does not like to  perform in stage. A piece of Gabriel in the soul of those whose ears will not allow them to hear the cheers of an entire crowd but target on the one, lone voice of criticism, a criticism that destroys any joy this moment may have held for them. Even a piece of Gabriel  can be found in the soul of his bullying father who masked his own pain with brutally cutting down others. Gabriel the intimidated. Gabriel, the ghost. Gabriel, the middle of the road guy. Gabriel who never risks. Invisible Gabriel. *****

Gabriel liked to take evening walks in the park. After a day in the factory he enjoyed the quiet, the open space. One evening he took a seat on his favourite bench beside an unassuming older gentleman who was gently glancing through the paper. “Hello Gabriel,”  the voice coming from behind the paper. “Excuse me, do I know you?” “Oh yes, you just don’t recognize me. But I know you.” Gabriel’s mind is flipping madly through the data files  in his head. An old teacher, a drinking buddy of his Dad’s, a doctor?

“Here, let me help you. Some call me Allah, and others Mohammed,  still others, the Great Creator, and the even more perplexed call me the Great Unknown.” “You’re God?” “Well, yes. I’ve take this form so as not to intimidate you. I have come to ask you a question, Gabriel. Why have you buried the talent I gave you?” “Me? I’ve got no talent. I’m just a regular guy doing what I have to to get by.” “Sounds like your father talking. He and I will need to have a talk some day. But for now Gabriel, I wish you wouldn’t insult me like that.” “Oh, I didn’t mean to…” “Gabriel, relax. I’m not here to ridicule you. I know, you have had enough of that in your life. It’s just that…you see Gabriel, I created you. I created you as this holy, beautiful child of mine, and when you think you don’t matter, think you are nothing, well, quite frankly, it insults me. My MO is to make things out of nothing not the other way around.

“So, what do you want of me?” “I want you Gabriel to enter into my joy.” “Well, I’m happy enough as long as people leave me alone.”  “But that is the point, my dear child. You were never meant to live alone, isolated by fear, living in  the void of absence. You have a whole world of brothers and sisters who I have destined to sit down with you at a great table together and celebrate life, your life included.

“Nobody is going to celebrate me.” “That’s where you are wrong Gabriel. I have sent my messengers out  onto the highways and the byways, to call everyone to the table. Sure there are those who ignore my request. Apparently, they’re too busy with their own lives.  So sent my messengers out to make sure the homeless are invited, the dispossessed, the abused, the imprisoned, and those like you, who think you have been forgotten. That’s the joy I want you to enter into but you can not come to the banquet until you have invested your talent.”

“But, I keep trying to tell you…” “My goodness. I hadn’t realized how badly this world had beaten you up. Do you know what your talent is, Gabriel?” A thick silence falls.  “Strength, Gabriel. Your ability to endure. In spite of all the beatings your soul has taken,  you have survived. Don’t mistake me. There’s a lot of healing yet to do. Coming to the table will be the beginning of that. But do you not think there is at least one person out there, one brother or sister, one co-worker beyond your paper, one neighbour, or even an old man sitting in the park, who in their desperation, might need to tell their story and maybe hear a story from one who has survived?

A beloved child of mine once said,

Blessed are the poor in spirit,

Blessed are those who mourn,

Blessed are the meek,

Blessed are the merciful,

Blessed are the pure of heart,

Blessed are the peace makers.”

I was pretty proud of him for that one. So tell me Gabriel.  Why are you burying your talent?”