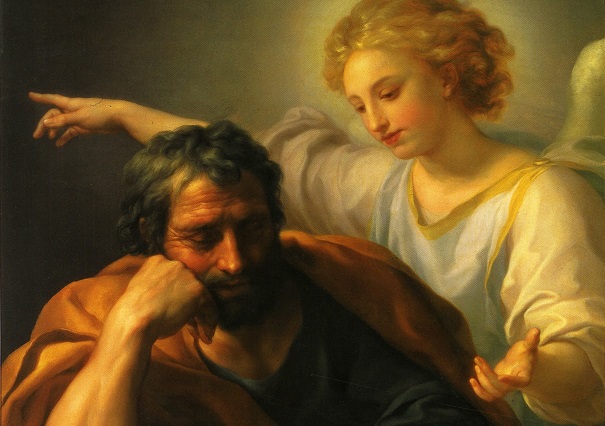 Joseph. The guy we dress in brown, put a staff in his hand, and tell to stand at the back of the stable as background for the magnificent light of the Madonna. The wise men get front row seats with their royal diadems. Even the lowly shepherds get first billing. The little drummer boy even has a place. But Joseph? We can’t even figure out which one is Joseph in the nativity scene in the back of the church that Kaye Jones gave to us. We thought we had it all figured out then Vicki came along and said Joseph can’t have grey hair, he’s not that old. So we just keep switching the guys up hoping that sometime in the rotation we get the right Joseph.

Disposable Joseph. It takes little imagination to think that Joseph probably felt much the same way about himself. Does anyone really care if what God has asked him to do was messing up his entire life? Life was set. He was a respected elder in the synagogue. Had a solid job, a good home. He and Mary would be the poster couple for a good Jewish family: devoted and committed to their faith.

Now, her first born child would not be his. This man who lived his life by the builder’s code of measuring twice and cutting once, is supposed to give up everything; his standing in the community, his honoured place in the synagogue being a direct descendant of King David, his job at this building site all because of a dream? Surprises are not the friend of builders. Things have to be planned in order to turn out right. The risk that is being asked of this steadfast, dependable man to take, is far outside of his character.

So today, he sits alone on the block of stone he has been working on, emptying his lunch bucket. It’s like his crew is afraid of being contaminated with this plague of rejection now enveloping him. The law is clear. He is supposed take Mary out into the village square and have her publicly stoned. But he’s decided to marry the woman. What message does that send to the other hand maidens? Yea, just go ahead and have your last little fling before you get married and we’ll still let you wear white on your wedding day.

Law is law, Joseph, and it is there for a reason. You can’t just decide to disregard the law because of your own personal feelings. It leads to moral decay! It must have been some kind of a dream to make Joseph decide to be different, to accept such a huge change in his life.

But you’ve been there, haven’t you? If you haven’t then you haven’t been listening, because life is lived in the constant struggle between the head and the heart. Your child informs you that his marriage is in trouble, when your generation didn’t believe in divorce, believing that a vow is a vow and it doesn’t matter what you feel. You do the right thing and stick with it. You have known people who have stuck it out through the rough times and in the end, were glad they did. On the other hand, you have seen people live a life of subservience in order to make it work, spending their lives fighting depression and alcoholism.

You’ve been married for few years, yet something is out of balance. It takes time for you to accept the reality that you may be gay. Now what? Do you destroy a relationship with someone you really care about? What about the kids? Or are you supposed to spend the rest of your life living a lie?

You are a faithful churchgoer and believer. Your faith has molded you into who you are, what your priorities are in life, what makes you you. But your kids aren’t interested in church. In dismissing the church, they are dismissing a part of who you are, a big piece. The head would say do everything you can to bring your kids back into the fold and learn of the support and love of God through this community. But your heart says, just keep loving them and trusting them enough for them to find their own spiritual journey.

As I said, if you have never struggled in your life between your heart and your head, then you just haven’t been listening.

What made Joseph, a devout Jew, defy the law and take Mary as his wife? Here is my take on this matter. Joseph was guided through his life by something only age and experience can teach you. Joseph was a master builder. There are those who are very good technically at building. To be honest, my father was one of those. He was incredibly good with math, could figure things out and make the fit. But he was not a craftsman. Today, many woodworkers are machinists. You need a piece of wood planed, you dial the thickness on a machine and run the board through it. Need a stone cut to fit in a certain space, just crank up the power saw with the 12” carbide blade and slice through it.

Not in Joseph’s day. To be a master builder you had to be a craftsman. You had to understand the texture and grain to select a piece of wood, the sharpness of your plane, which way you stroked the wood before you carved from it what it had to offer you. A piece of stone was worked with. You studied the grain, spied the crevices, got to know the stone before the chisel and hammer were applied. This was art. This meant you had to be connected to your materials.

The stone, the wood, they speak of their nature to you which describes where they came from; all part of the same earth which supports your living, the mud from which you were created; connection to the spirit of life, to the great architect of our being, to the designer of galaxies.

Redemption is more than just being good and following the rules. Redemption comes from being connected to the world around you, the living spirit of God that flows through all things as their life flow. I believe Joseph made the choices he did because he felt that intimate connection with the living spirit of God. Knowing about God through law and the word of scripture is not the same thing as knowing God’s presence in your life.

Joseph was willing to allow his whole ordered life to spin out of control, to become full of surprises he didn’t particularly like, which cost him everything because he believed in what he felt, as irrational as it seemed, he believed. It’s called faith. Maybe it is time to take Joseph out of the shadows of the stable and allow a little of that magnificent light, which was streaming down upon the Madonna, to fall upon him.